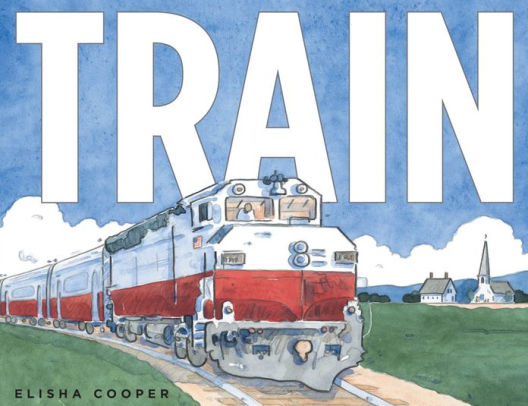 An East Coast commuter train leaves a station and the big city behind. In a small town, it slows and a big blue passenger train roars by. Eventually, the passenger train pulls into the station of a Midwestern city. In the nearby rail yard, a freight train is being loaded and then heads out. It rolls across the Great Plains. In the low hills of the mountains, an overnight passenger train goes by. It curves along high narrow passes and eventually speeds across a wide-open landscape in the night. In the morning, there is breakfast for passengers as a high-speed train comes into view. This train races toward the coast, coming into a modern city station. “And with a slowing turn into the station and an easing of speed and a sigh of breaks and a gentle last thunk, the train stops.” A picture book journey by trains moves across the U.S. landscape from East to West Coast. Authentic rather than nostalgic (with occasional artistic license described in the author’s note), the narrative and delicate, detailed watercolor illustrations capture speed and grace and grit (depending on the type of train). Sweeping exterior scenes, as well as captivating train interiors, give a sense of the train experience as both participant and observer. ©2014 Cooperative Children's Book Center