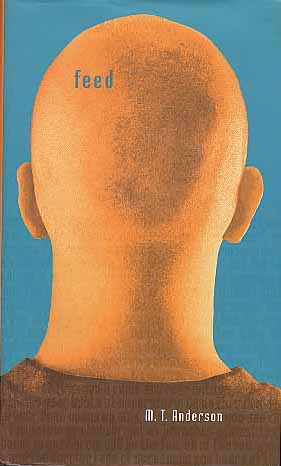 In M.T. Anderson's dystopic future, people rely heavily on their "feeds": an uplink hard-wired into their brains which bombards them with constant advertising and personalized buying guides, as well as allowing immediate "chats" with friends both near and far. Vocabularies have declined, disturbing news is repressed, and unbridled consumerism is the activity of choice. Teenager Titus and his friends spend without caution, from a Spring Break trip to the moon (which turns out to "completely suck") to buying clothes and updating hairstyles constantly (styles change throughout the course of a day). When Titus meets Violet, he's immediately attracted to this girl who stands out as different. As their relationship develops he discovers that Violet is different: she was home schooled, raised by parents who resisted popular culture, and didn't receive her feed until she was seven. She's interested in world events and isn't afraid to ask questions. When a hacker disrupts the teens' feeds, Violet's feed is damaged beyond repair, and she faces inevitable death. Eventually Titus isn't able to withstand his peers' condemnation of Violet's nonconformity, and he hides from the horror of her decline. Although he finally learns from his experience and begins to look beyond the self-absorption rampant around him, it is too little, too late. This brilliant satire works on every level, from the slang evolved from today's jargon and the recognizable television shows that have descended another step into vapidity, to the characters of Titus and Violet, who struggle to save a doomed relationship. Some elements of the story are repulsive, like the mysterious lesions that the teens develop (and adopt as a fashion statement, even resorting to artificial lesions weeping latex), and the language is sometimes raw and profane, but the entire thought-provoking package will challenge readers to take a hard look at consumerism and media control. ©2002 Cooperative Children's Book Center