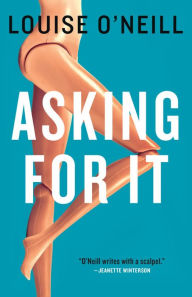 Eighteen-year-old Emma is beautiful. Her appearance is central to all her relationships as well as to the power she wields as a popular girl in her school. She is also thoroughly unlikable, manipulating everyone around her and projecting a sense of entitlement. Her life changes dramatically after one night of partying. The next day an online video surfaces of several boys sexually assaulting unconscious Emma. As she scrambles to take control of the fallout, Emma finds people are not eager to come to her defense. Eventually she reports the rape and her story becomes a media hot topic. She rarely leaves her house and can’t escape knowing everyone has seen the video, and most think she is to blame. But rape is a matter of consent and Emma never gave it to those boys. Her drinking and drug use, her sexy clothing, her flirting, her history of manipulation—none of that should matter. But in the court of public opinion they do and Emma—who thought she had so much power—is now powerless. In a book that exposes many of the contradictions young women face daily, the author’s dedication to leaving an untidy and unsatisfying ending makes this a raw and realistic read. ©2016 Cooperative Children's Book Center